Over the last two weekends, I introduced a bunch of local pike to the Shag Nasty. It’s a rather small streamer designed for pike, bass, and fall brown trout. The pike I introduced last Sunday were definitely not hatin’…well they hated it after they got a little taste.  The “shag carpet-like” yarn used to create the body has a really nice flow in the water, and the stinger hook rarely fouls.

I’m kinda lazy when it comes to fly tying. So the Shag Nasty, like most of my flies, is really, really easy to tie. Enjoy!

Step 1: If you are using the Conehead instead of the Fish Skull, you’ll want to add that to the shank first. You will need to bend the tail of the shank just enough so you can get the cone on the shank. Then bend the shank tail back into position. In these destructions, I’m using the Fish Head instead. Next, add the stinger hook. 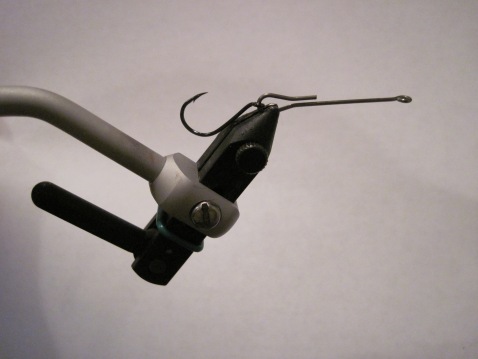 Step 2: Start the thread toward the back of the shank. A few tight wraps will ensure the hook stays in place. While you’re there, tie in a small bit of marabou. This gives the nice place to hide, and it gives the tail a bit of extra action. 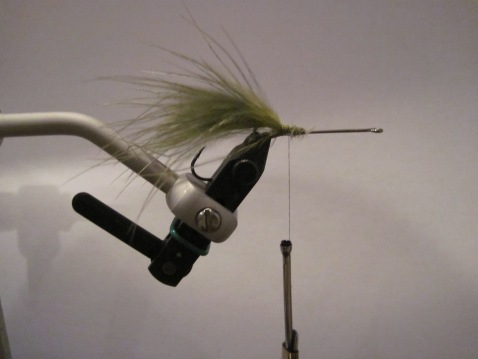 Step 3: Next, tie in some of the Fun Fur and wrap forward making sure all the loose strands get pulled back. Many wraps will (obviously) produce a bushier fly, and fewer wraps will craft a thinner fly. Your call, Boss.

Step 4: Tie off right behind hook eye, and a few drops of Zap-O will allow you to place and solidify the Fish Skull. If you opted for the conehead instead of the Fish Skull, you’ll tie off tightly behind the cone.

Step 5: Finish off the fly with a few wraps of red thread in front of the Fish Skull or conehead. Top the thread with a drop of Zap-O. Finally, glue on some 3D eyes for that finished look.

Step 6: Because that was so easy, go tie a half dozen more in silver, red, and purple. It’s an almost indestructible fly, so you don’t need too many. After a dozen pike thrashings, it still looks brand new.

For a recent bonefishing trip to Andros Island, I took my Hudson’s Mud Bugger fly pattern and turned it into a bonefish fly. It was a total experiment, but it turned out to be an awesome fly. The only problem was that I didn’t tie enough of them. Well, unfortunately, I’m not heading off to another tropical trip anytime soon, but my dad has been spending the fall chasing redfish and speckled trout down in Texas. So, I tied up and sent him a few variations of the Hudson’s Sand Bugger for his Texas flats adventures.

If you’re interested in the carp variation, Hudson’s Mud Bugger, you can find it here – https://unquenchablecuriosity.wordpress.com/2011/08/31/hudsons-mud-bugger/

Step 1: Tie in the eyes directly behind the hook eye leaving only enough room to whip finish at the end. I apply a spot of Zap-A-Gap to solidly anchor the eyes. This is a pretty durable fly, so let’s just make it bomb-proof.

Optional: This fly lands very softly on the surface, but you can play with the sink rate by adding 12-14 twists of 0.25 lead wire to the hook shank. Otherwise, leave off the extra weight as the large eyes are enough for most skinny water applications.

Step 2: Wrap the thread a bit past the bend of the hook, and build a small thread ball. This helps keep the turkey biots splayed out for a consistent presentation. 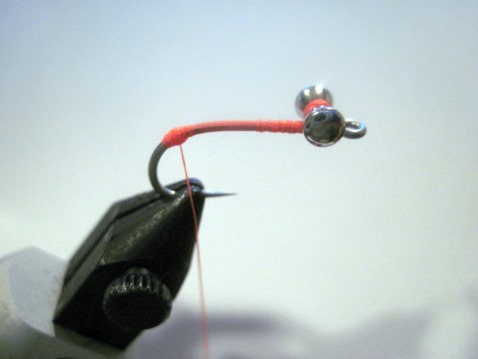 Step 3: Clip two small sections from the turkey feather. Match them up evenly by the tips and tie onto either side of the hook just in front of the thread ball. The turkey feathers should extend outward past the tie in point approximately 3/4 to a full hook shank length.

Step 4: Pull two feathers from the Bugger Pack that has fibers approximately 1 1/2 to 2x the hook gap. Strip off the fuzzy fibers and tie in just in front of the turkey biots. Wrap the thread all the way up to the eye.

Optional: Experiment with using one feather or two. I definitely use two feathers on a size 4 or 6 hook, but I sometimes just use one feather on a size 8 hook. Your call. Also, try one white feather and one brown. Mix it up because you never know what type of bottom you may be fishing.

Step 5: Palmer the hackle all the way (past the bead chain) up to the eye. I usually make a few wraps around the eyes if I have enough feather left. Anchor the feather down behind the eye and whip-finish.

Step 6: Now it’s time for a haircut. The head-stand effect of this fly is caused by the angle at which the hackle is trimmed. First run your fingers through the fly and get all the fibers sticking straight out. Take your scissors and start cutting as close as you can to the bead chain and eyes. You’ll want to angle your cut at an approximate 30-40 degree angle from the hook shank. After I’m done with the haircut, I’ll usually dab a bit of Hard as Hull head cement on the whip-finish.

What? You expected more?

Now tie them in different colors.  Legs and a bit of flash are other easy additions that could be fun, but I’ve found I didn’t really need them.

If this fly works for you, I’d love to hear about it. Leave a comment.