Imitation Is the Sincerest Form of Flattery

It’s been about a year since I’ve finished my first painting, and this is it. I’m posting this now as I’m reorganizing my office, and I’m trying to figure out where to hang it.

It was done in acrylic on plywood (2′ x 4′), and painted over a few months during graduate school. I was originally attempting to just throw down some paint to teach myself about mixing color and getting used to the medium, but I think it turned out pretty good.

This painting was blatantly copied from the cover shot of Catch Magazine, March 2010. The photo was taken by Brian O’Keefe of a nice rainbow being released into the Beaverhead River, Montana. I purchased the image through the magazine and used it as my computer background image for several months before I decided to attempt to paint it.

If you are not a subscriber to Catch Magazine (it’s free!), I highly recommend you check it out if you are an artist or a fly fisher. Brian O’Keefe and Todd Moen have created a beautiful publication that never ends to inspire me to fish, photograph, and paint. http://catchmagazine.net

Nowadays, I usually don’t copy paintings from other works, but you gotta start somewhere.

I’ve traveled in the mountains long enough to not be surprised by anything I witness while on an adventure. However, today, I was definitely startled for a few minutes. 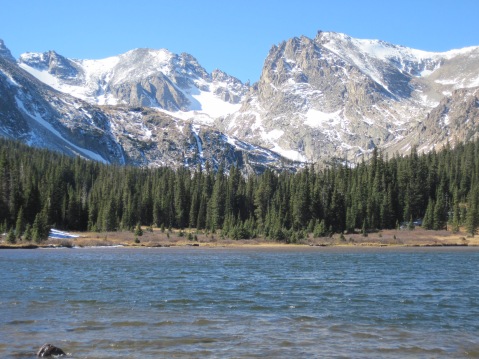 Then I suddenly felt a presence behind me. I turned around to see a decently large bull moose entering the water to my right. Isn’t it odd how you can just sense when something is coming up behind you? While I’m not surprised, it is the first bull moose I’ve ever seen in the area. I’m in the high country. I’m in a lake. I could see a moose. It should not really be that surprising.

Well, what startled me was his direction of travel which was toward me. Never before encountering a bull moose while standing in a lake, I didn’t really know what I should do. For every step he took toward me, I retreated a step. As he approached, he made blowing sounds through his nostrils like a terrible sinus congestion. The water was now over my waist, and I was running out of places to retreat. At 40 feet away, I decided something should be done. So, like any panicking idiot would do, I yelled at him and waved my hands and fly rod around like I was having a seizure.

His curiosity was sated. I was indeed like all the other idiots he had probably spooked in the past. Making an abrupt ninety-degree turn he strolled to the bank, went to the first stand of small trees, thoroughly tore the shit out of them with his large headpiece, and sauntered off along the bank. He was bored, but it totally made my day. It seemed like a good time to sit down, enjoy a lunch break, and let it all soak in. 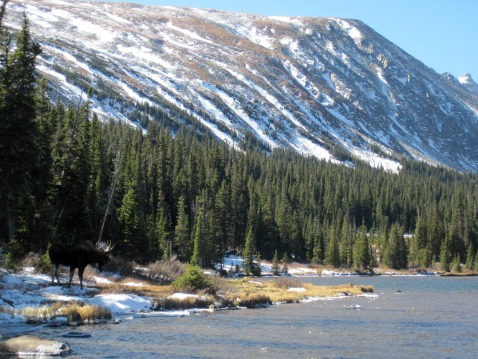 Oh yeah, another pleasant and unexpected encounter? Huge rainbow trout. I was expecting to whack a few tiny brookies today, but I never found any. Not a one. In the past, I’ve never caught anything but brookies in that lake. I’ve never heard of anyone else catching anything in that lake but brookies. Today, it was nothing but rainbows. Two of the biggest were 20″ and 21″. They were slamming into streamers like a freakin’ pike. Today was a good day.

Originally, I wanted some art for my living room, but I was too cheap to buy it. I hadn’t drawn anything in years (like 20), and I didn’t really know if I could pull it off. Who would have known that it would rekindle my interest in drawing and painting. 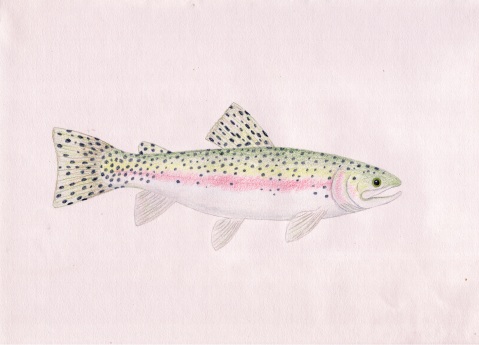