This year our family spent Spring Break in Southwest Colorado. It’s only a few hours from home, but it felt like a world away. The landscape was, also, completely different than my home back in Boulder. This was canyon country – rugged, dry, mysterious, and full of overlooked color. I was snapping photos everywhere hoping when I got back home I’d be inspired to paint some desert scenery. As it happened, I returned home most inspired by a weathered bighorn sheep skull that was hanging above the door on an old shed. At first, I was thinking I’d just paint the skull in the same well-known style Georgia O’Keeffe had painted skulls of animals she had found. However, once I got started the painting found it’s own voice. I’m pretty pleased with the outcome.

Like many of my other painting posts, I think it is fun to show the process. Here’s how it all went down…

I started, like most paintings, with a simple sketch. 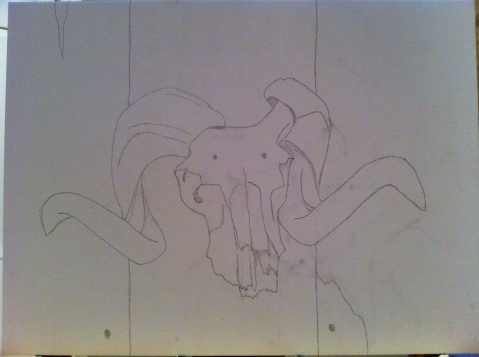 Then I added the first of many layers. My goal here was just to cover up the white.

I quickly came back with another few layers of color to define the background. I love acrylics.

The next step was also quickly done without much fuss. I added some various earthy brown hues without much care and simply dragged a damp kitchen sponge over the paint. This gave the wood grain effect of the shed’s siding. I later added some more detail with a brush to capture the shadows and cracks, but I didn’t spend too much time on it.

Before I called it a day, I went back over the actual skull with some basic solid colors to recapture the sketch so I wouldn’t loose it.

Next, I went to work on the basic skull. After I laid down some paint, I came back later to add shadowing so it was consistent across the whole piece. Now I know why Georgia O’Keeffe painted skulls over and over. They are so detailed and unique. At a distance a sun-bleached skull appears white, but on closer inspection there are lots of browns, yellows, grays, and hints of red. They are absolutely beautiful objects.

Finally, the last main section of the painting was the sheep’s horns. I thought about this for a while before I actually tackled it. I thought the horns would be daunting to blend in with the super-detailed approach of the skull, but I eventually decided for a more suggestive approach instead of laboriously painting the exact detail – I really need to get away from stressing over the details.

A few final touch ups, and I called it complete. I’m learning when to stop.

One response to “Bighorn Skull”