If you’d like to follow my future mindless ramblings and art posts, I have a new domain. Please bookmark and follow http://unquenchablecuriosity.com for my future posts on art, life, hunting, running, skiing, fly fishing, and raising kids.

You can subscribe to the NEW Unquenchable Curiosity by email here.

This year our family spent Spring Break in Southwest Colorado. It’s only a few hours from home, but it felt like a world away. The landscape was, also, completely different than my home back in Boulder. This was canyon country – rugged, dry, mysterious, and full of overlooked color. I was snapping photos everywhere hoping when I got back home I’d be inspired to paint some desert scenery. As it happened, I returned home most inspired by a weathered bighorn sheep skull that was hanging above the door on an old shed. At first, I was thinking I’d just paint the skull in the same well-known style Georgia O’Keeffe had painted skulls of animals she had found. However, once I got started the painting found it’s own voice. I’m pretty pleased with the outcome. 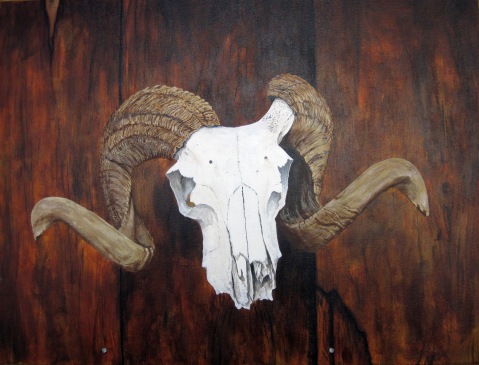 Like many of my other painting posts, I think it is fun to show the process. Here’s how it all went down…

I started, like most paintings, with a simple sketch.

Then I added the first of many layers. My goal here was just to cover up the white. 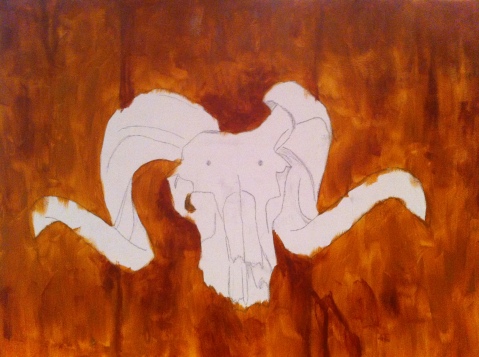 I quickly came back with another few layers of color to define the background. I love acrylics.

The next step was also quickly done without much fuss. I added some various earthy brown hues without much care and simply dragged a damp kitchen sponge over the paint. This gave the wood grain effect of the shed’s siding. I later added some more detail with a brush to capture the shadows and cracks, but I didn’t spend too much time on it.

Before I called it a day, I went back over the actual skull with some basic solid colors to recapture the sketch so I wouldn’t loose it.

Next, I went to work on the basic skull. After I laid down some paint, I came back later to add shadowing so it was consistent across the whole piece. Now I know why Georgia O’Keeffe painted skulls over and over. They are so detailed and unique. At a distance a sun-bleached skull appears white, but on closer inspection there are lots of browns, yellows, grays, and hints of red. They are absolutely beautiful objects. 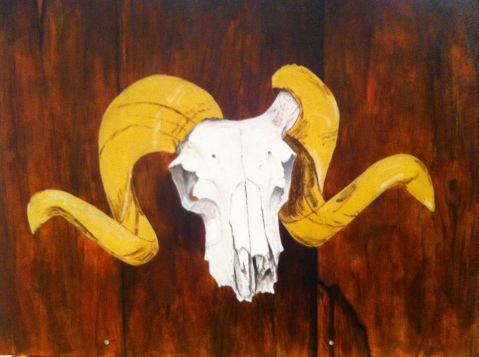 Finally, the last main section of the painting was the sheep’s horns. I thought about this for a while before I actually tackled it. I thought the horns would be daunting to blend in with the super-detailed approach of the skull, but I eventually decided for a more suggestive approach instead of laboriously painting the exact detail – I really need to get away from stressing over the details.

A few final touch ups, and I called it complete. I’m learning when to stop.

My lastest painting originated from a photo I took outside of the bunkhouse on the Rossi Ranch where I occasionally stay during elk hunting trips. It was about -10 degrees on a bitterly cold December morning. I just had gotten my elk and was about to head inside to cook some breakfast, but I couldn’t move. I just stood there and stared at these beautiful horses and the dramatic scenery in the background. 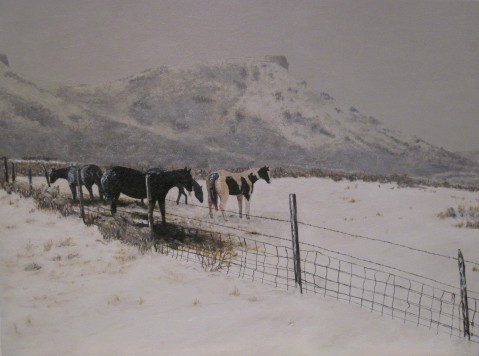 As usual, I like to post a few photos of the process, and I usually start out with a sketch. This time was no different.

Next, I set the tone by adding some dark colors on first. It’s nothing but a heavy glaze, but gets me going in the right direction.

Next, I work on the mesa in the distance. I get all the shape how I like them.

Then I wash the whole background with a little white to get the feeling there is a snow storm brewing in the near distance. I also take the time to block in the horses with something close to their final color.

Then I paint the bushes and fence in the foreground, and I add finishing touches to the horses.

Finally, well almost, I add some detail in the foreground. It’s here where I realized I didn’t know when to stop. I should have stopped a long time ago leaving the foreground partially barren to draw the eye down the fence and not add so much busy up-front. 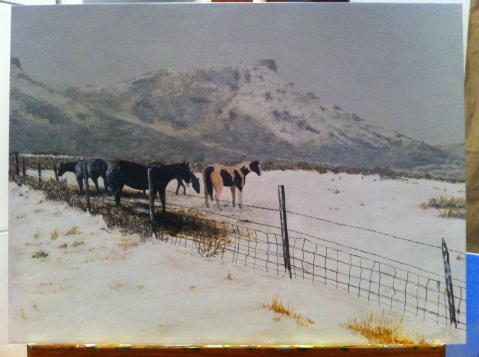 However, that’s easy enough to fix. Paint over some grass and preserving the snow. Now I’m calling it quits.

“My father was very sure about certain matters pertaining to the universe. To him all good things-trout as well as eternal salvation-come by grace and grace comes by art and art does not come easy.”

― Norman Maclean, A River Runs Through It and Other Stories

While working on a new painting that has a lot of grays, I thought it would be a good idea to see how many grays I could create with just a few colors. Turns out, more than enough. Heck, it’s twice the number Christian Grey has. 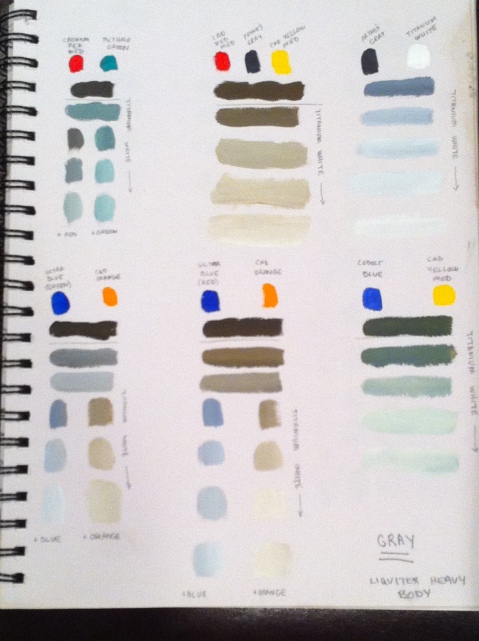 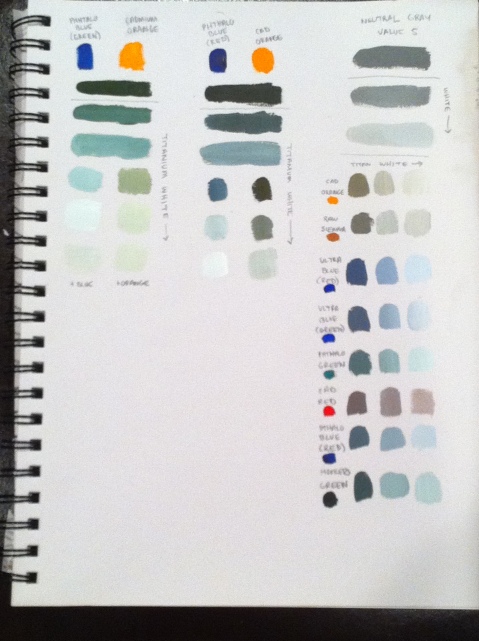 Some paintings have multiple lives. I started this one back in 2010. It was going to be a foggy woodland meadow landscape. I got bored with it, and I almost threw it out.

Fast forward to 2011. I was out on the eastern plains of Colorado pheasant hunting with a good friend when I saw this massive field of freshly bailed hay. I jumped out of the truck and took a few photos of the setting sun. It inspired me to go back and give new life to the neglected work in progress. Alas, I again lost interest in finishing it.

So, it’s now 2013, and I’m tired of looking at this unfinished painting. Pop the top on a few beers. A few dabs of paint, and, ummm, I think it’s done. 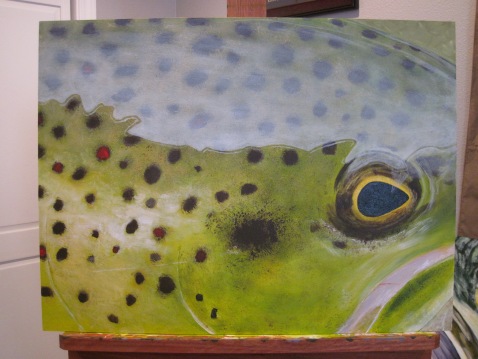 It’s the second painting in two weeks. Woohoo! I’m on a roll. Well, not exactly. I’ve got a nasty cold, and I’m trying to make the best of my time indoors. Here are a few shots of the process…

It all started with a pencil sketch.

Then I blocked in the whole surface with a little bit of color. 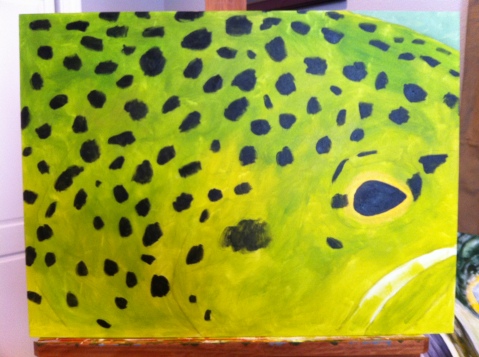 Whoa, that was a little too light. So, I then darkened it up a bit and added some color variation along the flank.

Then I added a few more layers and highlights. 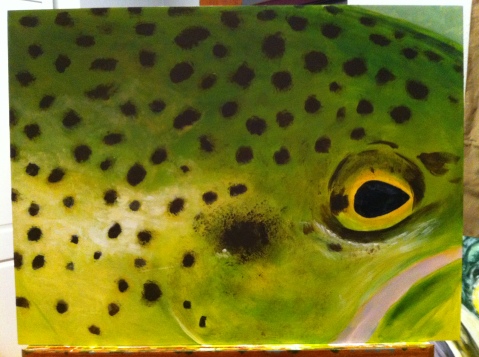 Next, I lightened the whole piece up a bit putting subtle browns  in the brown trout which couldn’t be complete without a few beautiful red spots.

Finally, I added the reflection, eye detail, and mouth corner. I’m not sure it’s done yet, but I’m done for now. 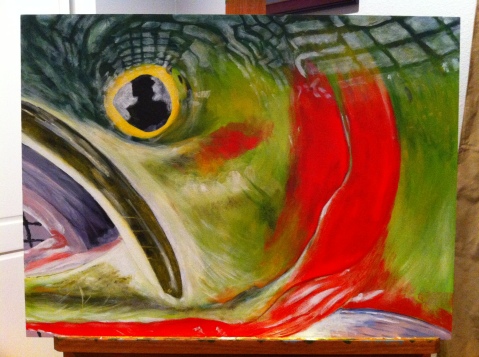